Founded in 1994, Ocensa manages Colombia's largest crude oil pipeline. The company's system has an average pumping capacity of 745,000 barrels per day, with 11 stations and four distinct segments, stretching 836 kilometers inland and 12 kilometers offshore. As a core strategic asset for the country, Ocensa is the main pipeline between Colombia's Llanos region and the Atlantic Coast, transporting approximately 65% of Colombia's crude production and 60% of the country’s oil exports. 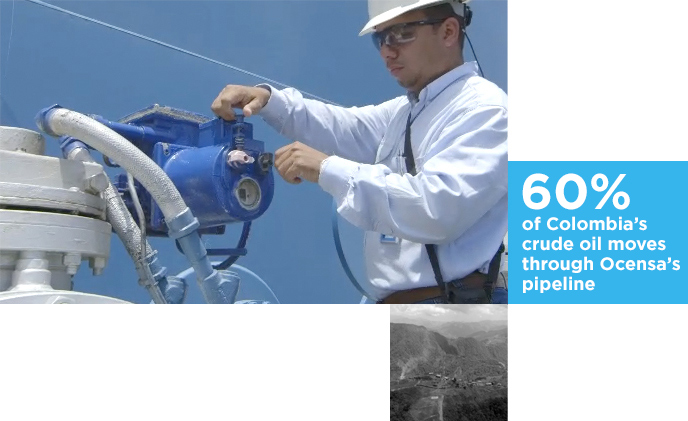 In December 2013, Advent International teamed up with Colombia’s two largest pension funds to purchase approximately 22% of Ocensa from Talisman Energy, Total Colombia Pipeline and Compañia Española de Petróleos. Cenit, a subsidiary of Colombian oil company Ecopetrol, retained a controlling stake in the business. Nine Advent professionals from Bogotá, Mexico City, Boston and New York worked on the deal, which marked our third investment in Colombia and fourth transaction in the energy sector in three years.

A STRATEGIC ASSET WITH STRONG FUNDAMENTALS

Our global energy team had been building its network and expertise in the oil and gas industry for some time prior to the Ocensa investment. One member of the team, Bogotá office head Mauricio Salgar, had extensive sector experience in Colombia, including a prior role as COO of Ecopetrol.

“We were attracted to Ocensa not only because of its strategic value to Colombia but also because of its compelling business model,” said Salgar. “The company has high margins, low working capital needs and strong, predictable cash flows. It also has a robust balance sheet with ample capacity to finance important new expansion projects.”

Ocensa was already operating Colombia’s most cost-efficient and reliable pipeline, but we saw potential to create even more value.

“With Colombia’s crude oil output doubling over the previous six years, and a pipeline system running at close to 100% utilization, the company clearly needed to increase capacity to sustain growth,” said Gurinder Grewal, a managing director in Advent’s Boston office who helps coordinate our global activities in the energy sector. “We believed we could support Ocensa’s well-defined expansion plans by bringing operational expertise and helping it raise debt financing for the projects. We also recognized an opportunity to increase income from non-regulated services, such as blending, port services and offloading facilities.”

Over the past four years, working in partnership with the management team and Cenit, we have helped Ocensa capture value along several of these dimensions.

Thomas Rueda, Ocensa’s CEO, calls the initiatives “the culmination of the company’s most ambitious growth strategy ever—catapulting Ocensa into leadership of Colombia’s oil transportation business for the foreseeable future.” According to Rueda, the company has benefited from Advent’s introduction of improved practices and world-class advisors to help steer the projects.

We also have encouraged Ocensa’s management to diversify the company’s capital structure from equity only to a more balanced combination of equity and debt. As a first step, Ocensa made its debut bond offering in May 2014.

During our ownership, we have worked closely with Ocensa to enhance pricing of regulated services, providing better inputs to the regulatory agency as part of Colombia’s tariff review process and analyzing alternative commercialization strategies. Because of new regulations approved in 2014, the tariff review process became more consistent and helped to improve long-term profitability.

As our investment continues, Advent and Ocensa's management are both pleased with developments to date and the company’s positioning for future growth. Expansion plans were completed, capital structure of the company was rebalanced, and the company has proven to be strong and resilient.

Just as important, the partnership is proving to be a good fit. As Ocensa CFO Rosemery Carrillo put it, “Previously, all of our shareholders were technical in nature. Advent has brought great balance as a strategic and financial partner. Its resources have made us a better operation and helped improve our stature in the international markets.”