Founded in 1966, Kroton is the largest private education company in Brazil and the largest worldwide in terms of market capitalization as of March 31, 2015. It provides post-secondary education services to more than one million students, with bachelor and technical degree programs offered at 130 campuses and approximately 700 distance-learning centers throughout Brazil as of March 2015. Kroton also offers teaching technologies and materials to a network of about 290,000 K-12 students in nearly 900 affiliated schools. 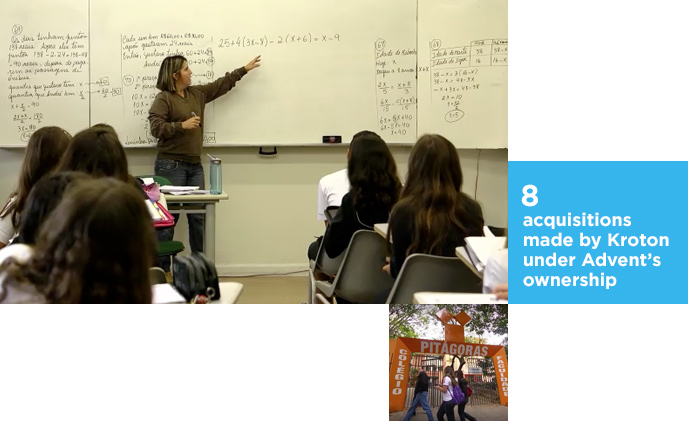 A FRAGMENTED MARKET,
RIPE FOR CONSOLIDATION

Advent International began investing in Brazil in 1997. By the late 2000s, we had developed a solid track record there, with more than a dozen investments. We were looking for opportunities in the fast-growing post-secondary education market and identified Kroton as a priority target.

“What we saw in Brazil was a fragmented education market with high demand,” recalled Juan Pablo Zucchini, a managing partner in Advent’s São Paulo office. Although the market grew at a compound annual rate of 11% from 1997 to 2006, Brazil still had a low number of students with post-secondary degrees—even relative to other Latin American countries. “With the top 10 players representing only 17% of the market, we believed Kroton had a tremendous opportunity to grow both organically and through acquisition,” continued Zucchini.

In 2009, Kroton was a public company, but its founders still controlled the business through Pitágoras Administração e Participações (PAP), a holding company that owned 58% of the outstanding shares. We built a strong relationship with the founders, and in July of that year we acquired 50% of PAP’s shares and, indirectly, 29% of Kroton.

Post-investment, we worked with the company to strengthen corporate governance and implement an efficiency program that increased operating margins by 640 basis points, excluding acquisition effects, from 2011 to 2012. In addition, management revamped the investor relations function, which subsequently won 11 awards including Latin America’s best small-cap IR program in 2012 and the region’s best large-cap IR program in 2013. The company also accessed the capital markets three times during our ownership, raising R$1.2 billion for expansion.

Even before our involvement, Kroton had grown steadily, and it was well-positioned to maintain its strong organic growth pace in the K-12 market. Yet we saw significant potential for the company to further expand in the post-secondary “face-to-face” segment and enter the distance-learning segment by acquiring leading players in these areas. To drive this strategy, we worked with management to create a dedicated M&A department, headed by a former member of Advent’s deal team.

In our four years as an investor, Kroton made eight acquisitions, including a number of transformative deals. For example, the company doubled its size with the acquisition of IUNI in March 2010. It became the largest distance-learning player in Brazil with the purchase of Unopar in December 2011. And it assumed the position as the largest education company worldwide by market capitalization when it agreed to merge with Anhanguera, Brazil’s No. 2 player, in April 2013.

With the successful execution of the company’s value creation plan, we began to divest from Kroton in December 2012. Over the next year, we completed our exit through a series of block trades.

Today, including Anhanguera, Kroton has more than one million post-secondary students and a market capitalization of over R$14.9 billion (US$5.1 billion) as of March 31, 2015. The business has continued to thrive and grow, and the outlook remains positive.

“Kroton has always offered quality education,” said CEO Rodrigo Galindo. “But Advent’s strategic guidance and acquisition expertise allowed us to build the business into Brazil’s market leader in post-secondary education and distance learning, offering our services to more than a million people across the country. We are a stronger company today as a result.”