ABC Supply is the largest wholesale distributor of roofing supplies in the United States and one of the nation’s largest distributors of complementary exterior building products. Headquartered in Beloit, Wisconsin, the company sells roofing, siding, windows, doors, gutters, rainware and related accessories for both residential and commercial use to builders and contractors. ABC generated sales of over $5 billion in 2014 and as of March 31, 2015, had more than 490 branches in 49 US states, employing approximately 7,000 people. 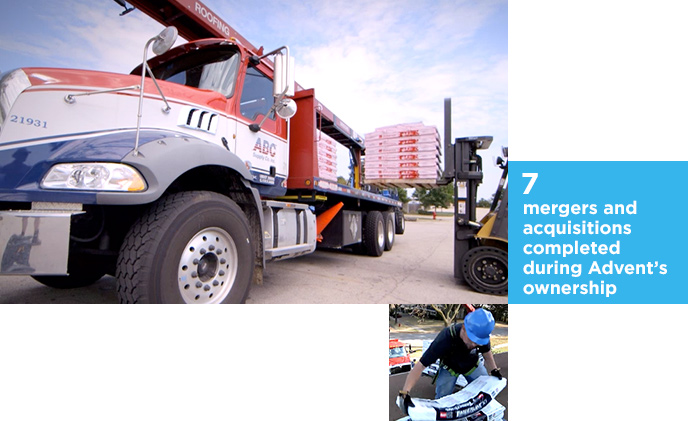 SPOTTING OPPORTUNITIES
AMID THE DOWNTURN

Advent International began exploring investment opportunities in building products in 2006‒07, around the time the US housing market began its historic decline. Across the home-building industry, prices were falling as suppliers and builders weathered the worst crisis in memory. Yet we believed that the roofing supply subsector would prove resilient given the relative stability of demand for repair and replacement work. We also saw opportunities to consolidate a fragmented industry.

In 2007‒08, we contacted the largest industry players, including ABC Supply (No. 1) and Bradco Supply (No. 3), about potential investments. ABC was not interested in selling a stake in its business at the time, but Bradco’s family owners were open to discussions. In August 2008, we acquired 80% of Bradco in a proprietary transaction that resulted directly from our proactive approach.

Over the next two years, we worked with Bradco’s leadership to build market share by investing in enhanced salesforce capabilities and completing four acquisitions. The team also improved the company’s cost structure, consolidated underperforming branches and optimized the balance sheet to generate attractive returns on capital.

MAKING A STRONG PLAYER
EVEN STRONGER

Although the housing market had yet to turn around, we still saw the potential for expansion and again looked at ABC Supply, which by that point had shifted its focus from greenfield expansion to acquisitions. While the two companies sold many of the same products, their customer bases were complementary: Bradco was strongly positioned among large national builders, while ABC had built its business around smaller contractors.

Advent Managing Director Stephen Hoffmeister recalls, “We were impressed by ABC, especially the sophistication of its management team. It was a people-oriented company, and its CEO, David Luck, was a veteran at integrating acquisitions.”

Together with Bradco and ABC, we decided that the best strategic approach was to combine the two businesses. The merger, completed in June 2010, created the country’s largest roofing and exterior building products distributor, more than 2.5 times the size of its next largest competitor. Between the rollover of our Bradco shares and an incremental investment in ABC, Advent owned about 25% of the enlarged company.

BUILDING VALUE
AS ONE COMPANY

The growth plan for the combined business centered on cross-selling ABC’s non-roofing products and private-label products in Bradco branches and Bradco’s commercial roofing products in ABC branches, making additional acquisitions and expanding into new product segments such as gutters, siding and windows.

The integration of Bradco and realization of cost synergies went even faster than planned. “We had expected the process to take 18 months, and we were able to achieve it in 12 months,” said Luck. In 2012‒13, ABC went on to acquire six more building supply wholesalers.

All of these initiatives contributed to strong growth, with the company’s EBITDA increasing 42% from 2010 to 2012. By the end of 2012, ABC had $4.7 billion in sales and approximately 460 branches, compared with Bradco’s $1.5 billion in sales and 130 branches at the time of Advent’s original investment.

In late 2012, ABC’s majority owner, seeing the long-term growth potential for the business, approached Advent with an attractive offer to purchase our stake. We finalized the sale in April 2013, four-and-a-half years after our original investment in Bradco. Today (March 2015), the company remains the clear No. 1 amid a recovering market.

“Joining ABC and Bradco was truly transformational, and a great win for both teams—exceeding everybody’s expectations,” said Keith Rozolis, who was ABC’s COO at the time of the merger and succeeded Luck as CEO and president in 2014. “But we’re not done yet. Our plan now is to grow to $7 billion in revenue and 700 locations, with world-class financial performance. And we want to keep behaving like a very small big company, without losing sight of the things that made us what we are today.”