Meet our US team
Back Next Previous Print

BOSTON and LONDON, April 2, 2020 – David Mussafer and James Brocklebank, Managing Partners and Co-Chairs of Advent International’s global Executive Committee, today issued the following statement in response to the passing of Advent’s founder Peter Brooke, who died April 1, 2020, at the age of 90: 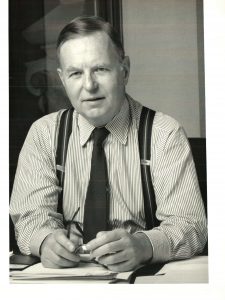 “Peter was a visionary whose contributions to the venture capital and private equity industries cannot be overstated,” said Mussafer. “He was simply one of the finest individuals I’ve ever known, a feeling that was shared by everyone who worked with Peter. We are deeply saddened by his passing and our hearts are with his family and loved ones.”

“Peter personified integrity, fairness, humility, diligence and collegiality – the very attributes our firm strives to exemplify today,” added Brocklebank. “His strategic vision was matched by his exemplary character. He was an ongoing part of our life and work, and will continue to inspire us all.”

ABOUT PETER BROOKE
Peter Brooke was born on October 6, 1929, in Worcester, Massachusetts, and was educated at Phillips Exeter Academy, Harvard College and Harvard Graduate School of Business Administration.

After more than a decade spearheading venture investing at the First National Bank of Boston, Bessemer Securities and Tucker, Anthony & R.L. Day in the 1950s and ’60s, he founded private equity firm TA Associates in 1968.

As Peter’s vision broadened beyond the U.S., he spun Advent out of TA in 1984 with an eye toward creating an international investment platform. With his foresight and leadership, Advent grew to become one of the world’s largest and most global private equity firms, with teams operating across 12 countries on four continents. In 1996, Peter retired as CEO of Advent but remained Chairman until December 2015.

Peter was an advocate of strong governance and served on the boards of numerous corporations and institutions. During his career, he was a Director of Cambridge Technology Management Limited UK, Excello Corporation, New England Business Service Inc., Unitrode Corporation and Wang Laboratories Co. Inc., among many other companies.

He was an Overseer of Harvard University and a Life Trustee and Chairman of the Board of Trustees of the Boston Symphony Orchestra. Peter was also a Trustee of Colgate University, the Eisenhower Exchange Fellowship, the Middlesex School and WGBH Educational Foundation.

Peter was inducted into the Private Equity Hall of Fame and received the National Venture Capital Association’s Lifetime Achievement in Venture Capital Award, Harvard Business School’s Alumni Achievement Award and National Association of Corporate Directors New England Chapter’s Lifetime Achievement in Governance award. He was a Fellow of the American Academy of Arts and Sciences. The Boston Business Journal named Peter one of Greater Boston’s 100 most influential business people of the 20th century.